Founded in August 2000, Eddingtons have built a reputation for finding innovative and quirky kitchen tools and gadgets.

Since 2000 when Eddingtons was founded by Brian Rogers they have always seen themselves a little bit different from the mainstream housewares suppliers. The early team began to source the perfect Eddingtons tool or gadget that fitted in with their ‘Functional but fun’ mantra. Over the last two years they have joined forces with brands such as Bee’s Wrap and Wade Ceramics. Acquiring the brand Gilberts Food Service Ltd in March 2017 opened up a new market for Eddingtons allowing them to reach a new selection of great European brands such as Truedeau and Valira 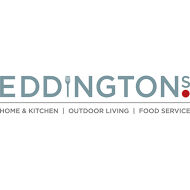